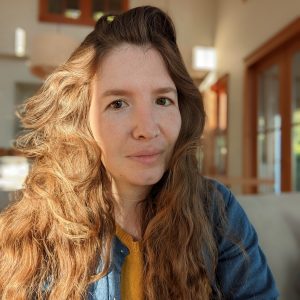 Caitlin Elizabeth Thomson was born in Tacoma. She lived briefly in Vancouver and grew up in Toronto.

In 2008 Caitlin moved to New York to study poetry at Sarah Lawrence College, where she taught senior citizens memoir writing and helped an AP English class prepare for the poetry section of the examination.  She was also the poetry editor of the literary journal Lumina. In 2010 she graduated from Sarah Lawrence with a Masters of Fine Arts degree in Poetry.

Her poems have appeared in numerous journals and anthologies including Tar River Poetry, The Adroit Journal, The Moth, The Penn Review, Radar, Cosmonaut Avenue, Going Down Swinging, The Conium Review, and Killer Verse (Knopf). Her work has been nominated for the Pushcart Prize, the Best Indie Lit New England (BILiNE) prize, the Best of the Net anthology, and The Best Small Fictions Anthology.

Her manuscript, Soul Selects Her Own Society was a finalist for the ECW Best New Speculative Fiction award in 2021.

Caitlin founded and runs The Poetry Marathon with her husband Jacob. The Poetry Marathon recently completed its eighth year which involved 500 participants from all over the world. A big fan of writing challenges, she’s also completed The 3-Day Novel Writing Contest, NaNoWriMo, NaPoWriMo, Script Frenzy, and a play in a day competition.

She currently lives in Toronto, Canada with her family, where she edits Authors Publish Magazine, and runs The Writer’s Workshop at Authors Publish. She spends most of her limited free time writing prose, knitting, peddling a bike that will never go anywhere, and reading middle grade graphic novels to her daughters.